The WANGO Awards Banquet, held on the evening of October 23, 2004 in Budapest, Hungary, was one of the highlights of the 2004 Annual Conference. Five NGO were recognized for their outstanding service and exceptional contributions to society. WANGO Awards were presented in the categories of Civil Society Development, Family & Peace, Environment, Humanitarian, and Peace, Security & Reconciliation. 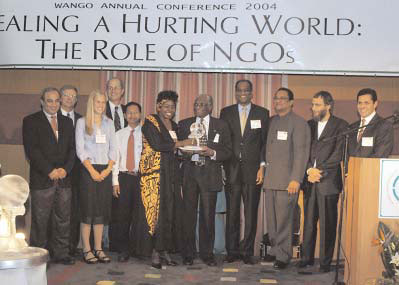 The 2004 Civil Society Development Award was presented to Star Kampuchea. Star Kampuchea is a Cambodian NGO that is leading the effort to strengthen civil society in that nascent democracy. Through its numerous programs, including the development of an NGO Code of Ethics, Star Kampuchea has been at the forefront of improving the coordination, effectiveness, and credibility of NGOs, and tackling issues of critical importance to the civil society sector and the people of Cambodia. It has become a well-known and respected organization, with a solid reputation among government bodies, civil society actors, and donors. Tens of thousands of people and hundreds of NGOs have benefited from its activities. It also has many officially affiliated NGOs as part of its Cooperating Organizations, and coordinates four Provincial Networks of NGOs.

The 2004 Family & Peace Award was presented to United Families International. United Families International (UFI) is one of the world's leading, non-governmental organizations devoted to maintaining and strengthening the family as the fundamental unit of society. UFI monitors family issues globally, working to educate the public about timely issues, and is the coordinating organization of the World Family Alliance, a coalition of organizations and individuals from diverse countries, cultures and religions, united in the belief that the family is the fundamental unit of society. In 2003, UFI also launched the Defend Marriage Campaign to help protect the institutions of traditional marriage and the natural family from the growing threats they face today in the United States.

In taking the decision to present United Families International with the 2004 Family & Peace Award, the WANGO International Council was most impressed with the consistent and courageous commitment of UFI to the protection of this natural and basic unit of society. One of WANGO's founding principles recognizes that strengthening the family is a fundamental route to creating a world of peace and well-being. WANGO commends the efforts of United Families International to maintaining and strengthening the family, and thus working at the most essential level to build a better world.

Dr. Thomas L. Christensen, a founder of UFI, who was joined on the platform by his daughter, Jennifer, received the award. Jennifer Christensen commented first. "I wish to thank those who are standing up and defending the family. There is no cause that is greater. If I had one wish for the youth, it would be that each one could have a father and mother who would provide, nurture, teach, and most of all, love their children. I truly believe that if we want to heal the world, we have to save the family." Dr. Christensen also spoke. "As the family weakens, so does our individual happiness, our sense of order in our personal lives, and the order in our society. We can not achieve our greatest and noblest aspirations if we leave the family behind."

The 2004 Humanitarian Award was presented to Small Kindness. Small Kindness, which was founded by Yusuf Islam (formerly Cat Stevens) in 1999, works to alleviate the suffering of families and children in the Balkans and the Middle East. Small Kindness helps the most vulnerable victims of war and conflict, such as orphans, widows, and young girls, by providing direct relief and support, while employing and utilizing local staff and infrastructure and being sensitive to the cultural needs of the communities it is serving. Small Kindness was one of the first aid agencies to directly provide financial support to orphans and families in the aftermath of the Iraq war. It also opened the first European Management Training & Educational Center in the heart of Baghdad University, and has over 500 girls on the rolls.

The WANGO International Council admires Small Kindness' tireless work in various countries to bring vital emergency aid and humanitarian relief to war-affected families and victims of poverty and natural disasters. The goal of this organization to not only provide emergency relief, but also long-term solutions involving educational programs, community development and cultural programs, is a noble goal that needs to be supported and recognized. The founder of Small Kindness, Yusef Islam, received the award. In Mr. Islam's comments, he quoted from a chapter in the Koran that says that a person is doomed who does not have compassion. "Do you not see the one who denies the judgment? Such is the one who pushes away the orphan. And does not even encourage the feeding of the poor. So woe to the worshippers whose hearts are heedless in their prayers, who wish to be seen by others but refuse small kindnesses." He concluded in saying that he is "honored to be part of this community, helping to heal, not to hurt. And, there is nothing so powerful as the human act of giving."

[Subsequently, Yusuf Islam was awarded the "Man of Peace Award" at the opening of the World Summit of Nobel Peace laureates at Rome's City Hall on November 10, 2004. The Gorbachev Foundation, which presented the award, recognized Yusuf Islam for his charity, Small Kindness.]

The WANGO Environment Award was presented to the Buccoo Reef Trust. The Buccoo Reef Trust is a Caribbean non-profit organization, which is tackling the serious challenges facing marine environments in that region, with particular emphasis on the threats facing Tobago's coral reefs, particularly the 10,000 year-old Buccoo Reef, the largest coral reef in Tobago. Through education, research and active ecotourism, the Buccoo Reef Trust is fostering an attitude that will enable people to protect the marine environment while ensuring sustainable use of the region's aquatic resources. It is working to build and operate the Tobago Marine Research Centre as an internationally recognized institution of research and education that will serve the Southern Caribbean region as a focal point for coral reef conservation and the development of sustainable aquaculture.

Honorable Gerald George MacFarlane and Ms. Kaye Trotman, Directors of Buccoo Reef Trust, accepted the award. Hon. MacFarlane addressed the audience. He acknowledged, "The key to the success of our operation is the process of networking. .We will be contributing to this year's conference theme "Healing a Hurting World," for we'll be living it out in our slogan and our motto, as it reads "Protecting our sea of life must be our way of life." He concluded by commending WANGO for all of its efforts in addressing some of the world's critical issues.

The 2004 Peace, Security & Reconciliation Award was presented to PeaceWorks Foundation. Through its OneVoice initiative, PeaceWorks Foundation has been tackling one of the most pressing and intractable issues of our day - the Israeli-Palestinian conflict. At the heart of PeaceWorks Foundation is the fundamental belief that this conflict, like many of our world's most violent crises, has been greatly exacerbated by small groups of radical extremists. These groups have stalled political peace processes and effectively silenced the vast majority of people who prefer peace to fear and uncertainty.

The Founder of PeaceWorks Foundation, Daniel Lubetzky, has long been restoring the voice of peaceful moderation through creative and self-sustainable projects that promote cooperation and overcome hatred. PeaceWorks Foundation was officially launched in 2002. PeaceWorks Foundation's OneVoice Initiative has three offices in the Middle East: an Israeli office, a Palestinian office, and a regional coordination office overseen by Mideast Regional Director, Mohammad Darawshe, a prominent civil leader.

In taking the decision to present PeaceWorks Foundation with its Peace, Security and Reconciliation Award, the WANGO International Council was most impressed with the PeaceWorks Foundations innovative platform and methodology to enable a broad base of citizens to be actively involved in the peace process. The OneVoice program is an extraordinary idea, and the Council commends and recognizes its work to amplify the voice of the Israeli and Palestinian moderates and achieve grassroots consensus for conflict resolution.

Mideast Regional Director, received the award. In his comments regarding the Palestinian & Israeli situation, Mr. Lubetzky emphasized "losing hope means resignation to inspiration, which is a dangerous precursor to accepting defeat at the hands of violent extremist thinking that pervades in the tiny minority." He stressed that each one of us "must dare believe that we can make a difference; we must dare believe that we can change things." He admitted that it is often difficult to convince people that they can make a difference, "but if they don't make a difference, nobody else will do it for them.. It is the failure of leadership at the bottom that has gotten us to where we are right now." He concluded in saying that "the NGO community has a very important role in helping to mobilize the people, in helping vest them with the recognition that they do have the power and the duty to make a difference."