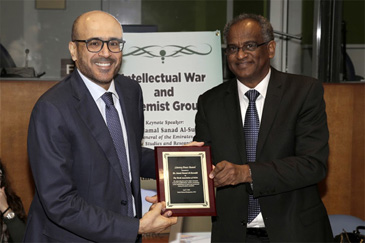 The recipient of WANGO's first Literary Peace Award is H.E. Dr. Jamal Sanad Al-Suwaidi, a United Arab Emirates intellectual, writer, strategic expert, and the Director General of the Emirates Center for Strategic Studies and Research (ECSSR). Dr. Al-Suwaidi received the award from WANGO Secretary General Dr. Taj Hamad on April 7, 2016 at an event on âIntellectual War and Extremist Groupsâ WANGO hosted with the Permanent Missions of Grenada and The Gambia at the United Nations Headquarters in New York City.

Employing strategic studies and research, Dr. Al-Suwaidi has made distinctive contributions toward the cause of progress and stability in the Arab world. He has authored several books, including The Mirage (2015), which describes the emergence of extremist groups and how they exploit religion for their narrow political goals; Prospects for the American Age: Sovereignty and Influence in the New World Order (2015); and From Tribe to Facebook: The Transformational Role of Social Networks (2013).

In presenting the Literary Peace Award to Dr. Al-Suwaidi, Dr. Hamad recognized Dr. Al-Suwaidi for his courage and the sacrifices he endured to educate the world about extremism through The Mirage.

On the same day after the award was given, The Mirage won the 2016 Sheikh Zayed Book Award, one of the most prestigious prizes in the Arab world, for its âContribution to the Development of Nations.â Dr. Al-Suwaidi has also received several other awards from Arab as well as international institutions, including the Knight of Arab Studies Award from the Arab Producers Union in 2015; the Mediterranean Award for Diplomacy from the Fondazione Mediterraneo in 2014; and the Abu Dhabi Award in 2011.