In 2008, only one non-governmental organization, Challenging Heights, was recognized with a WANGO Award. Selected by the WANGO Awards committee under Dr. Noel Brown (President, Friends of the United Nations) and presented by WANGO's International Council, Challenging Heights received the 2008 WANGO Award for Education. This award was presented at the WANGO Africa Conference, which was held in Accra, Ghana from April 24 to 27, under the theme NGOs as Agents of Positive Change. Gathering for this event were not only African NGO leaders, but also representatives of the corporate and governmental sectors and leaders from Asia, Europe, and the Americas. The award was personally presented to the founder of Challenging Heights, Mr. James Kofi Annan, by the WANGO Secretary General, Mr. Taj Hamad. 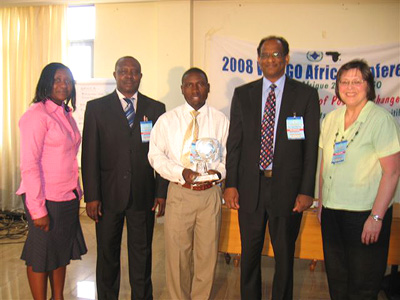 Established in 2003, Challenging Height was formed to empower children through education, providing support to indigent students in Ghana. Its founder, Mr. Annan, was himself a victim of child labor. Mr. Annan has used his own resources to address the problems that confront Ghanaian youth, regularly funding Challenging Heights with close to sixty percent of his net salary each month. Mr. Annan essentially used his own means to fight against the things that had mitigated against him â poverty, disease, child labor â paying for educational materials, scholarships, and medical care for children. Through Challenging Heights, Mr. Annan dedicated himself to promoting access to quality education and health for young people.

Challenging Heights has made great strides in protecting the rights of vulnerable children and youth, assisting in the development of their talents, and striving to prevent child labor while offering support for its victims. Challenging Heights provides educational scholarships and materials so that children can enroll in school and has built a classroom structure to enable children in communities to be able to learn in the evenings. It operates a school with youth ranging from the ages of four to fifteen, offering scholarships to about eighty percent of the children. Challenging Heights organizes community presentations for parents on protecting their children from child labor and the need to send their children to school. In 2007, Mr. Annan quit his lucrative job in a bank to dedicate himself fulltime to Challenging Heights.

Mr. Annan own life story is one of overcoming of tremendous odds to not only bring personal success, but to use his own success for the sake of others. Sold into slavery at the age of six, he worked in Ghanaâs fishing villages 17 hours a day. Food and shelter were scant, abuse was constant. Seven years later, he escaped back home to his parents. At 14, he could not read and write, but befriended kindergartners so he could use their schoolbooks to learn to read, and worked to feed himself and pay for school. Eventually, he broke still unsurpassed records on standardized tests, graduated college, and landed a job at Barclays Bank. But Mr. Annan did not limit his goals to self-improvement, but has devoted himself to end modern-day slavery and helping the less fortunate, which he tackled through his founding of Challenging Heights.

After receiving the 2008 WANGO Award in Education, Mr. Annan was nominated for a Free the Slaves Freedom Award and on September 15, 2008, in Los Angeles, California, Archbishop Desmond Tutu, winner of the 1984 Nobel Peace Prize and the 2007 Gandhi Peace Prize, presented James Kofi Annan with the 2008 Frederick Douglass Award. This award was a highlight of the 2008 Freedom Awards of Free the Slaves. The Frederick Douglas Awards is given to one individual who has survived a form of slavery and is now using his or her life in freedom to help others exercise the purpose of their lives. This award honors the tremendous resilience of the human spirit and emphasizes that many of the survivors of modern day slavery go on to help others to freedom. The recipient receives $10,000 for a program of training and capacity building to continue and expand his or her work, as well as $10,000 to be awarded over two years, and used as he or she feels appropriate. The Freedom Awards are underwritten by the John Templeton Foundation.

Mr. Annan is the latest in a line of individuals who have been recognized for subsequent awards after receiving a WANGO Award. In 2003, WANGO recognized the Green Belt Movement of Dr. Wangari Maathai with the Environment Award, one year before Dr. Wangari received the Nobel Peace Prize. After receiving the 2004 WANGO Humanitarian Award on behalf of his NGO, Small Kindness, Yusef Islam (formerly Cat Stevens) was awarded the âMan of Peace Awardâ at the opening of the World Summit of Nobel Peace Laureates, particularly recognizing him for his charity, Small Kindness. In 2004, WANGO's Peace, Security and Reconciliation Award was presented to the PeaceWorks Foundation, and it initiative One Voice, and was received by Founder Daniel Lubetzky. In 2005, One Voice was honored by Queen Noor with the King Hussein Humanitarian Leadership Prize, in an event attended by such luminaries as UN Secretary General Kofi Annan, former U.S. President Bill Clinton, actress Meg Ryan and musical artist Sting, among others.