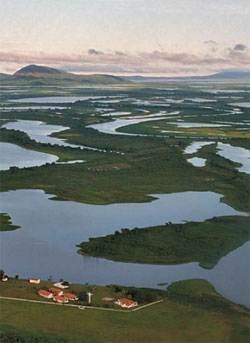 EcotrÃ³pica (FundaÃ§ao de Apoio r Vida nos TrÃ³picos) is a non-profit, environmental organization in Brazil devoted to conserving natural resources and maintaining the quality of life in tropical ecosystems. Founded in 1989 in CuiabÃ¡, Mata Grosso, Brazil, FundaÃ§ao EcotrÃ³picaâs main mission is to protect the Pantanal. The Pantanal is the worldâs largest, freshwater, wetland system, located south of the Amazon and extending through millions of hectares of central-western Brazil, eastern Bolivia, and northeastern Paraguay in central South America.

The Pantanal is essentially an immense alluvial plain, situated along the northernmost part of the Paraguay River and its tributaries that becomes extensively flooded during the rainy season. Estimates of its size range from 140,000 square kilometers (54,000 square miles) to 210,000 square kilometers (81,000 square miles), making it larger than many countries â larger than England, Austria, Hungary, and such U.S. states as New York, Florida, and Wisconsin. The Pantanal also is one of the most pristine and biologically rich environments on the planet. It is home to one of the richest animal faunas in the world, perhaps the highest concentration of animals in the New World. It also acts like a giant sponge, providing flood control, and it removes pollutants and sediments. However, despite offering numerous ecological, economic, cultural, recreational, and aesthetic values, the Pantanal faces an uncertain future stemming from a myriad of socioeconomic pressures.

Through EcotrÃ³pica, 60,000 hectares of the Pantanal, bordering Pantanal National Park (Parque Nacional do Pantanal Matogrossense) have been made into Private Reserves (Reservas Particulares do PatrimÃ´nio Natural) â one of the important complexes of private protection on the planet, where many species of animals, including some endangered species, call home. Ninety-eight percent of the Brazilian portion of the Pantanal is privately owned making such protection vital. EcotrÃ³pica also has completed an inventory of biodiversity in the Serra do Amolar, works to help local people to survive, is developing âgentleâ ecotourism, and is dealing with agricultural, educational, sanitary, and financial issues.

In taking the decision to present EcotrÃ³pica with the 2007 Environment Award, the WANGO Awards Committee and the WANGO International Council were impressed with the pioneering effort of EcotrÃ³pica to protect the Pantanal, an area that remains pristine but is facing increasing threats to its future. EcotrÃ³pica is the leading conservation organization in this region, striving daily to assure that the Pantanal does not go the way of decline as seen in the precipitous decline in so many other wetland systems in the recent years. Through recognizing such effort, WANGO hopes to bring greater international awareness to both the Pantanal and the exceptional work of EcotrÃ³pica.