On a cold, though somewhat sunny, November weekend, young women from the Toronto area and other Canadian cities came together to play in the first ever Play Football (Soccer) Make Peace (PFMP) young women's soccer tournament, held November 10-11, in Mississauga, Canada, town just outside of Toronto.

These young women, pioneering PFMP's "Young Women in Soccer" initiative, were treated to a weekend of education, competition and fun. Five teams composed of girls age seventeen and under participated in the tournament; the teams were Bryst Academy of Toronto, Brams United of Brampton, DPS United of Pickering, DPSoccer of Hamilton, and Pincourt from Montreal, Quebec. 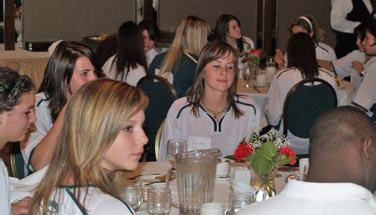 PFMP is a project of the World Association of Non-Governmental Organizations (WANGO). Having traveled from Montreal, Team Pincourt was provided accommodations at the Delta Chelsea Hotel in Toronto as guests of honor of WANGO, which was holding its annual conference, the World Congress of NGOs, in the hotel on the same weekend.

The vision and values of PFMP were introduced at the beginning of the games. Each player and coaches were given an explanation of the history of PFMP, its principles and code of conduct, and were also introduced to the role sport can have in peace and development, and how the girls can be ambassadors for peace through sport.

Throughout the tournament, many of the PFMP core values and principles were exhibited by the teams during the tournament. Teamwork, good sportsmanship and fair play were just some of the many positive aspects that were evident in the young ladies' behavior throughout the weekend. Teams were able to play at a high competitive level, with the young ladies displaying great skills and knowledge of every aspect of the game. However, it was their demeanor towards the game and their composure and respect for their opponents that was even more impressive.

In honor of the PFMP event, a special dinner was held during the World Congress on Saturday evening. Dr. Peter Donnelly of the University of Toronto's Physical Education department was invited as the guest speaker. Dr. Donnelly is part of the academic team which is working very closely with the United Nations Initiative on Sport for Development and Peace. Canada is one of the leading supporters of this UN program.

Dr. Donnelly presented many of the pros as well as the cons of sports, and pointed out that it is the responsibility of society to use sports as a medium to promote peace and character development. As Dr. Peter Donnelly stated, playing sports does not always guarantee positive outcomes, but it is no secret there are many things a young person can learn in sports that is not always available in the home or in an academic institution.

Although DPS United of Pickering came out as the champion in the PFMP tournament, all the participants emerged as the true winners. As important as winning is in soccer or in sports in general, it is what these young ladies learned and took away with them from the weekend that is most important. The parents and coaches present over the weekend witnessed the positive effect that the tournament and its messages on their daughters.