Playing Soccer For Peace Throughout the World

A report was given in the summer issue of Beyond Boundaries about the Play Soccer Make Peace! (PSMP!) project, its principles of sportsmanship, and tournaments in Nigeria, Ghana and the Democratic Republic of Congo. It was announced that tournaments would take place in Estonia, Guyana, Liberia, the Solomon Islands, and Zambia. All of those countries did indeed hold PSMP! tournaments. Further tournaments have also since taken place in Goa (India), Senegal, Cameroon, Mongolia and Kenya. 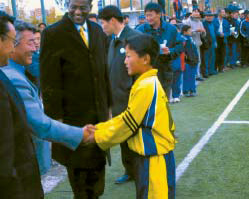 Since November, the island nation Palau has also embarked on a soccer education program. This is a unique opportunity because, through PSMP!, soccer is now developing and being organized as a youth sport in Palau where it was seldom played before.

During January and February, PSMP! tournaments will be held in the Seychelles Islands, Cambodia, Uganda, Papua New Guinea, and Sudan. Preparation is now in process for tournaments in Jordan, Peru, Comoros, Uzbekistan, Indonesia, Angola, Suriname, and Nepal.

Mrs. Yvonne Hinds, wife of the Prime Minister, cordially greeted the players of the soccer teams in Georgetown, Guyana

To read detailed reports from past tournaments, and to find out about future events and PSMP! Developments, please visit www.pfmpeace.org. The tournament is unique in each country; no country is quite like the other. However, what is common is the enthusiasm shared by the players, their coaches, and the soccer associations involved.

The reports from each tournament reveal the investment of heart and the effort behind each country's project. There is so much effort being made at the country level by the PSMP! coordinators. The coordinators face unexpected contingencies. Their personality, talents and skills help solve the myriad of small hiccoughs that accompany such a project. Their hard work has allowed young soccer players to compete, play hard, demonstrate their skill and display their heart. 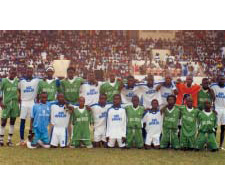 Have there been challenges? Certainly, PSMP! is not an instant formula; it is a process. Emotions can run high, but keeping in mind the Principles of PSMP!, referees, coaches and coordinators have helped the players keep their focus on the larger purpose, even while they are pushing their bodies to the limits. So much goodwill has been created. It was common to hear from every country inquiries whether the tournament could be expanded to include more teams, and more people. Teams that found out about PSMP! after the tournament complained that they had been left out; they want to be included next time.

In the Solomon Islands, our PSMP! Coordinator, Sophia Chottu, had team captains, from various parts of the Solomons, knocking at her door in the middle of the night asking to be a part of the tournament. Sophia could not say "no." Being a grandmother with such a big heart, she felt that she needed to include as many teams as she could. Sophia told me that she had no relationship to soccer before PSMP! She had thought that the way to peace was through conferences and service, but now she sees that peace can also be built through sports and soccer!<7p>

Each WANGO representative who took up the PSMP! challenge has made a remarkable contribution. I think that the vast majority of the tournaments have gone smoothly (not to forget the torrential rainstorm, the day of the PSMP! Cameroon final, but they persevered even into the evening time). A common thread is that there is an incredible sense of hope whenever the tournament takes place. Soccer is challenging; there are matches won and lost. But throughout the tournament, teams and players try to maintain the principles of the PSMP! and keep that larger vision in mind even when it is tough!

Just this month the PSMP! tournament took place in Israel. The world looks at Israel as the test case of peacebuilding. It was a great opportunity, and testimony to the PSMP! Coordinator, Mohammad Darawshe, who was able to bring 4 Arab teams and 4 Jewish teams to join together in the tournament. We had hoped the teams would be matched equally and that it would be a genuine model for peace. I think we were able to achieve that. The President of the Israeli Football Association attended the final, and was overjoyed with what he witnessed. The final match was a Jewish team, Maccabi Haifa against Sakhnin, an Arab team. Sakhnin won 3:1. The IFA'S President stayed to enjoy the post game celebrations, and promised to include the PSMP! tournament and its education in the IFA's 2005 program. He commented that PSMP! added an element to Israeli soccer that had been missing, but could now be included. 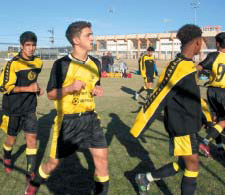 Soccer players in Israel jog to warm up before their game

After the tournament, the teams from the Israel PSMP! felt that it was unfortunate that the quarterfinals already meant 4 teams were eliminated. On their own initiative they proposed that all the teams and players meet together in March for a reunion, to have a chance to get to know each other better, and to learn from one another.

This is exemplary. The success of the PSMP! activity is not only the tournament but also the lasting relationships it helps to build, and the commitment to the wider community and the responsibility that these young people are taking. Stories are being posted on the web site. I encourage everyone to give voice to his or her achievements. Good luck to all those in future PSMP! tournaments!