In May of 2006 an earthquake, measuring 6.2 on the Richter scale, struck Java, Indonesia, killing over 3,000 people. In addition to the thousands of others who were injured, entire villages were destroyed subjecting survivors to further suffering. Among those who experienced such destruction were the villagers of Ngelepen. But, their plight did not go unnoticed.

Less than three months later, a July meeting between Taj Hamad, Secretary General of WANGO, and Mohamed Ali Alabbar, Chairman, Emaar Properties resulted in both men agreeing to bring relief to the villagers of Ngelepen through an innovative plan to quickly recreate the village whose destruction had instantly left so many homeless. Promptly after the completion of an extensive feasibility study, Domes for the World Foundation (DFTW), a Texas-based non-profit organization, was retained.

DFTW was tasked to rebuild the village of Ngelepen by applying its expertise in the construction of environmentally friendly homes that can withstand the severe effects of natural disasters. With a generous grant from Emaar Properties, WANGO contracted DFTW and work began in October of 2006. From the outset, WANGO and DFTW acted cooperatively in determining the design, in securing all the requisite approvals, and in carrying out every facet of the construction. The project was completed before the end of April, two months ahead of schedule.

"It was our intention to support the residents of Ngelepen, whose lives were disrupted," said Mohamed Ali Alabbar. "As a global developer, Emaar upholds a social commitment to societies bearing the brunt of disasters wherever they are based. The rebuilding of Ngelepen, as a pilot project, will serve as a model for a disaster-safe, permanent, economical, sanitary and efficient construction strategy in disaster-prone areas."

More than 370 people, comprised of both villagers and international experts, took active part in this project. The villagers were trained by DFTW, and quickly learned the unique construction methods used by DFTW to construct its Monolithic Ecoshell housing. The newly rebuilt village of Ngelepen is comprised of 71 homes; six communal domes offering laundry and bathroom facilities; a kindergarten school; a medical/health clinic and a mosque. To further enhance the community, additional effort was made in the building of a playground and the village's infrastructure of roads and a drainage system.

"This was an extraordinary project," said WANGO's Taj Hamad. "It would not have been possible without the generous support of Emaar Properties, the well-intentioned expertise of DFTW and the resilient spirit of the people of Ngelepen. By spearheading this initiative, I hope that the membership of WANGO, and indeed NGOs worldwide, will rally together to more speedily tackle problems resulting from disasters, whether natural or man-made. The international community must endeavor to give full effect to the pledge undertaken at the United Nations Millennium Summit (2000), and in particular the related "Cities Without Slums" initiative, to improve the lives of the 100 million people who live in slums and abject poverty." 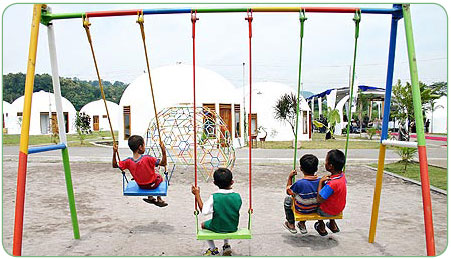 The opening of the New Ngelepen creates a community that has prevailed over the most adverse of circumstances. This project is intended to serve as a template for future efforts to timely remediate other communities suffering similar losses. 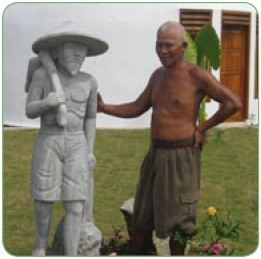 Villager with one of the statues created locally for the village 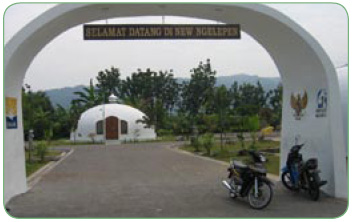 From the beginning of the New Ngelepen Project, "the work was blessed" in the words of Rebecca South, Domes for the World. Construction was smooth and swift, and completed ahead of schedule, even though much more was done that initially planned. The New village of Ngelepen is comprised of 71 houses, 6 MCKs (laundry, toilet and shower facilities), a mosque, a kindergarten school, and a medical/health center. The homes are built in clusters of 12 surrounding a MCK and green space. Six new wells were drilled to supply each cluster of homes with potable water, and six independent septic systems were installed. Each home is equipped with ample ventilation, light fixtures, power outlets and clean drinking water from the kitchen faucet. 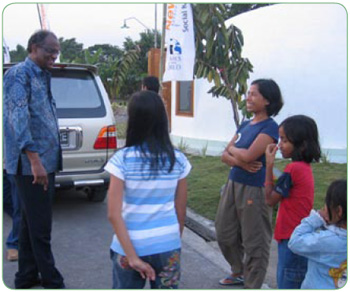 Everyone continually expressed gratitude and appreciation for the construction of New Ngelepen. Local workers were trained in the dome building technology and were paid for their work, which resulted very positively for the local economy. The village had many curious and enthused visitors throughout its construction, for the opening ceremony, and after the villagers were all settled in. 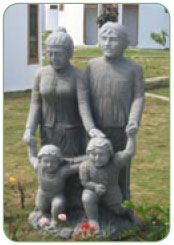 One of several statues made locally for the village