Ngelepen, Indonesia; April 30, 2007 - In an international testimony to its corporate social responsibility, Emaar Properties, the Dubai-based property developer, is reconstructing an earthquake-ravaged village in Indonesia. The rebuilding work, undertaken with the participation of the local population and the provincial municipality, was completed three months ahead of schedule in April 2007.

A joint initiative with the World Association of Non-Government Organizations (WANGO), Emaar's US$1 million (AED 3.67 million; IDR9 billion) project in the village of Ngelepen encompasses the construction of unique Monolithic EcoShell Dome homes, which mitigate the effects of natural disasters. Emaar's fund also goes into building a clinic, reconstructing roads, landscaping and planting of fruit trees.

"We wish to support the residents of Ngelepen, whose lives were disrupted in the devastating earthquake of May 2006," said Mr. Mohamed Ali Alabbar, Chairman, Emaar Properties. "As a global developer, Emaar upholds a social commitment to societies bearing the brunt of disasters, wherever they are based. The rebuilding of Ngelepen, as a pilot project, will serve as a model for a disaster-safe, permanent, economical, sanitary and efficient construction strategy in disaster-prone areas." 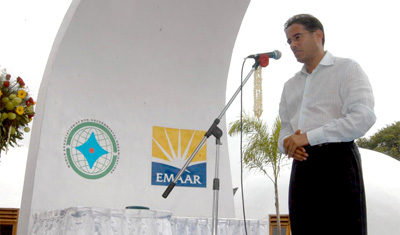 More than 3,000 people were killed and thousands injured in the devastating earthquake in Java in May 2006. The quake, measuring 6.2 on the Richter scale, flattened several buildings and devastated villages.

The Emergency Relief Domes Housing Project in Ngelepen started in October 2006 following a meeting between Mr. Alabbar and Mr. Taj Hamad, Secretary General, WANGO. "We contracted Domes for the World Foundation, which specializes in the construction of environment-friendly homes that can minimise the effects of natural disasters," said Mr. Hamad of WANGO. "An in-depth field and feasibility study was undertaken for constructing the dome-shaped homes with the participation of the local population."

More than 370 people including villagers and experts took part in the pilot project, and 80 well-trained and 100 semi-trained villagers adapted easily to the construction methodologies for the Monolithic EcoShell homes. These homes are two-bedroom concrete structures with living and dining facilities finished with floor tiles, and a wooden mezzanine level that can be converted to additional living areas. Emaar has already received over 200 requests from individuals requesting that similar homes are built for them.

Project staff documented all aspects of the construction to ensure easy replication of the model in other parts of the world. "We are thankful to the Indonesian government for their support to the venture and are grateful that the initiative has been accepted by the government and the Gadjah Mada University Department of Architecture. Officials of the United Nations had toured the village and their reaction was extremely encouraging," said Mr. Alabbar. "The response to the homes from the local population and press has been positive, and reinforces our commitment to socially relevant causes."

Emaar is in discussions with authorities for the construction of homes in the earthquake-affected areas in Pakistan.